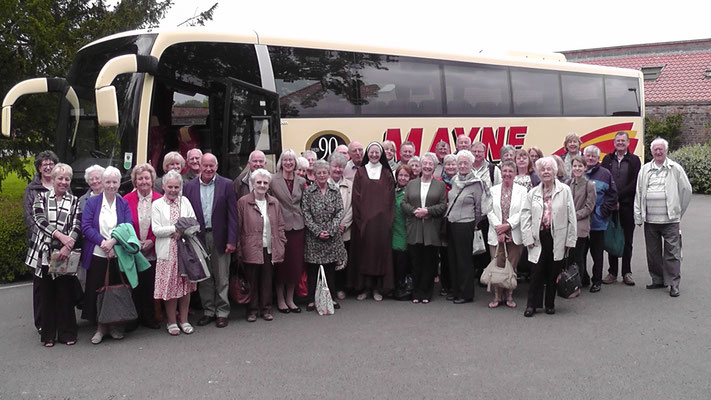 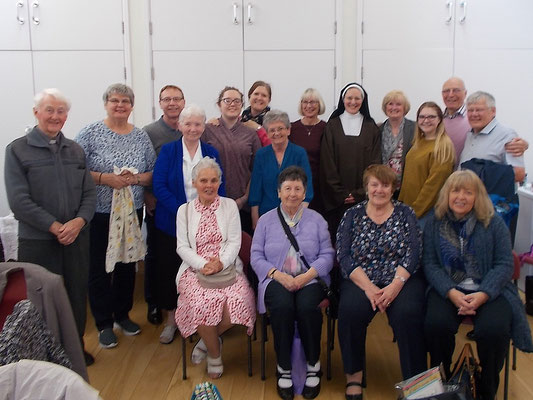 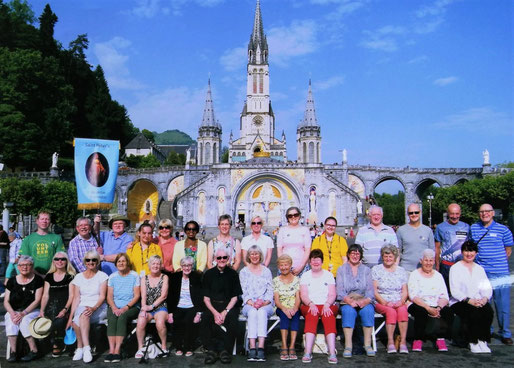 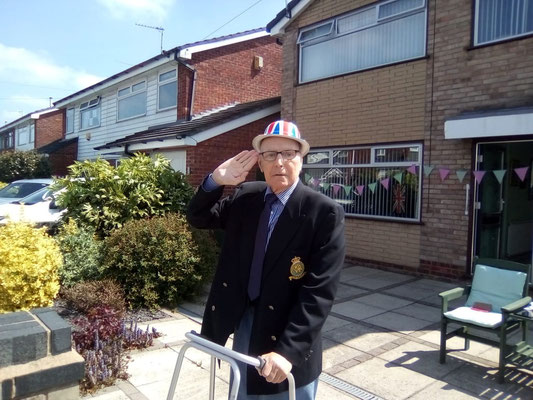 Dad didn't do half measures. Whether at work or play he went at life head on in top gear driven by an inherent instinct to give his all, to do things properly.

He was invariably the first on the dancefloor and often the last to leave the party, while he also threw himself into every task, project and event with equal vigour. There are countless examples, so many tales. Arthur himself did love to tell a story, whether you had time to listen or not, so on behalf of Chris, Paul, Clare and me I'll do my best not to keep you too long.

In 1983 he decided to run the London Marathon. Race applicants were required to submit an entry form in person on a given date in November. While an early alarm call may have sufficed for most, to ensure he was first in the queue to guarantee his race place dad instead set up camp outside Altrincham Post Office the day before armed with sandwiches and a flask of coffee, attracting the attention of the local newspaper. 'A marathon wait indeed' ran the headline with a photo of a cold but cheery Arthur. For the record he finished in an impressive 3 hours 37 minutes. He often said he would have been even faster with the technology of modern running shoes, and I don't doubt him for a second.

Two years on he ran London again, this time raising £500 for St Peter's 150th anniversary celebrations. Not simply by pinning a sponsor form on the church noticeboard of course. Dad wrote to every tourist attraction in the North West asking for donations of family tickets as prizes for a draw, then set about the parishioners after mass selling raffle tickets. No one was safe on the way out to the car park, he didn't so much ask you as thrust a book of tickets in your hand, and if you were especially naive he'd give you 10 books and ask you to sell them on, then catch you next week expecting a successful return of monies and definitely not unsold tickets.

St Peter's school fete was no different. Once he got the gig as chief organiser he was away. Planning, canvassing, cajoling, constructing, creating, he never stopped.

On the morning of the fete if he caught you standing still you'd either find yourself ferrying trestle tables across the field, or stood behind one all afternoon running a tombola stall, something you probably hadn't counted on when you came to help out for an hour.

He ran stalls himself as course, unless he was actually opening the fete as he did one year dressed as Star Wars' Darth Vader. No cheap outfit either, with mum's help he fashioned an authentic costume with a homemade paper mâché helmet. Children loved it, even if the voice was more Jimmy Tarbuck than James Earl Jones. A few years later when dad was asked to be Father Christmas for the school party, he took the same approach. The outfit was a few years old, so instead dad procured a top-end Santa suit with hat, wig, beard and gloves. He said the kids expected the real Father Christmas, so his job was to make their experience as authentic as possible. They weren't disappointed, screaming excitedly as he Ho Ho Ho'd his way into the school hall. It was genuinely a joy for him and made more special when told by the Head he was the best Father Christmas they'd ever had. Well of course he was.

As a working man he was a true grafter who rarely clocked up less than 50-60 hours a week to provide for his family. Night shifts, daily overtime, and countless miles covered on foot as a postman were his life, usually with just one night off a week.

On those rare free evenings, he was happiest at home with his dear Chris by his side, watching their favourite live concerts of George Harrison, Roy Orbison, Andrea Bocelli, or country legends Merle Haggard & Wille Nelson. He loved to be surrounded by his extended family for special occasions, Christmas being his favourite time of year when of course at the traditional pulling of crackers he would never fail to tell us with a grin how he'd pulled a cracker xx years ago.

It was a particular joy for me to see the pure love and delight in him at becoming a grandad to Eleanor and Maisie, and how he cared for them as much as he encouraged messiness and mischief in their company. The girls will both dearly miss the founding member of The Daft Club.

He loved Christmas so much so that it wasn't over come the New Year.

As a postie he didn't have a regular Christmas party as the office worked around the clock in December, so it was held in January, and no prizes for guessing who was responsible for organising the do. Letters were written, hospitality managers grilled, catering managers given strict instructions, DJs hired, and bidding wars started over room rate negotiations - "I'm bringing 150 guests to your hotel... I could go to the Park Royal instead..."

It sometimes seemed over the top watching his meticulous approach, but dad got exactly what he wanted. And that was to give his colleagues and their families a special evening to enjoy and remember.

Holidays were his reward for his toil, with annual trips to the South West fondly remembered by Paul, Clare and I. Whether body boarding in Cornish coves, fishing off St Ives where we discovered dad had no sea legs, or enjoying the evening's entertainment at the site club, dad was happiest with his family around him.

As us kids flew the nest mum & dad went further afield and fell in love with Greece and its islands. We've all had a go at the simple language basics to get by when going abroad. "Hello...two coffees/ice creams/beers please...thank you...", that kind of thing. But dad enrolled at college and learnt Greek to a decent level, once or twice on holiday being mistaken for a local and cheekily going along with it pretending not to completely understand his fellow tourists before giving the game away.

At the tender age of 65 he fulfilled a dream to cycle around the Peloponnese peninsula, a road trip of a mere 600 miles under his own steam, planned with military precision as you would expect. Off the tourist trail English speakers were rare, but with his conversational Greek to hand he was often treated like family at the various stopovers along the way. A measure of his charm as much as excellent Greek hospitality. At the end of the trip mum joined him for a more relaxing week by the pool. She said those many Greek and Cypriot holidays they took together were the only times when she really had dad all to herself, when he was completely relaxed in the sunshine and not preoccupied with his next pet project.

Back home he rarely sat still in a chair for long, unless he was watching his beloved Liverpool. Although he didn't sit very still even then, watching matches nervously even when we were at 4-0 up. Mum didn't need to watch to know the score, she could be in the kitchen, the greenhouse, at the Co-op, she'd know just by hearing his amplified reactions. In 1977 he travelled with Uncle Don to Rome for Liverpool's first European Cup final. I didn't know until recently, but times were tight and he was only persuaded to go by mum after she insisted on giving him her engagement ring to sell at the pawn broker to fund the tickets and travel. True love indeed, just as well the team won and brought the cup home. He passed the Liverpool legacy down to us as children and we are all richer for it, so it was particularly poignant for us that he was able to see his team win the league again after such a long time.

Following retirement and with more time on his hands he found plenty to keep himself occupied. If he wasn't busy in the house or garden he would often be found helping out in some capacity at church, writing and printing the bulletin, polishing brasses or tending to the St Peter's memorial garden that he and mum helped to create.

He would clean the plaques and tidy carefully around the roses planted with the ashes of loved ones. As was his way he undertook this role with great stewardship and delicacy, guiding relatives through the process with much sensitivity at a difficult time, something that was much appreciated by many who have been in touch with us this week.

Arthur took his last holiday in 2019 with Chris and their fellow parishioners to Lourdes. Leading up to July he'd not been too good following six rounds of radiotherapy, but he was determined to make the trip especially in his capacity as the official tour guide for the party. The previous year he'd been frustrated at how the company rep had hurried the party along between the hotel, grotto, masses and places of interest, and of course had let him know, politely but firmly. So, this time Arthur took on the job and even had his own name badge pinned to his chest just so you were sure.

Like every other situation he didn't do it for himself, he did it for his friends to make sure they were comfortable, and their needs accommodated so they could better enjoy the experience. He even arranged for a mobility scooter for Father Gildea, who despite his initial reluctance was soon buzzing around the town like Lewis Hamilton.

Father was dad's priest, but first and foremost he was his very good friend who he cherished dearly. This strong bond was evident when just before dad died mum asked if Father would anoint him. Gilly was incredibly moved, saying he was so pleased and privileged to have that opportunity. There's no doubt at all dad felt equally as privileged to have his dear friend with him.

As a family we were already very aware of how much dad was loved and valued by his wider family and his friends in the parish and beyond, but we have been incredibly overwhelmed, humbled and comforted by the lovely cards, flowers and heartfelt messages delivered at or through the door. On behalf of Chris and us all, thank you all so much for your love and kindness.

Dad was driven, determined, stubborn even, but ultimately, he lived his life exemplifying the values of his Christian faith. Selflessly, humbly and invariably for the benefit of others.

A loyal & loving husband, a fiercely proud caring dad, a doting, soft, daft grandad, and a dear friend to all who knew him.

We will miss him more than we yet realise but will always think of him with immense love and great pride.

Click to read the Bulletin!
Click here to read this weeks Homily!
Making a donation/ Setting up a Standing Order

These are all said as a Sunday Mass

Masses are still being live streamed

Every Sunday at 11am from the Liverpool Metropolitan Cathedral

Every Saturday at 5pm from St Mary of the Isle

Daily at 10am from SS Anne and Bernard

To help we have also put together some sources of information; videos, readings and prayer resources. You can find these in the Notices and Events tab.

Please Note: Times of weekday Masses can vary depending on availability of clergy and days of obligation.